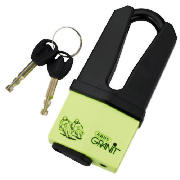 Our list is not exhaustive or comprehensive but they are all measures that will reduce the chances of having your bike nicked. Due to increased motorcycle insurance premiums and the excess on your policy, it is worth investing in several different methods to secure your bike, not only at home but also when you pop to the shops for 5 minutes. If you scrimp on your bike’s security you may pay the price in the long run. It just isn’t worth the risk!

Lets face it, no-one likes to see their pride an joy vanish without trace, the inconvenience caused, claiming from your insurance company (if they pay up), buying a new one, informing the police etc, the whole process could take months.

Garage Alarm – Buy a motion sensative garage alarm and fix it at the far end of the garage, this gives the thief less time to attack it. Check the location, don’t block the sensor, test it, when does it go off?

Ground Anchor – Don’t place it in the middle of the garage so the thief has more space to use their disc cutter, crowbar etc.

Garage Lock – Use a lock simiar to the Garage Defender, fit in the middle of the door to prevent the corner being forced.

Brake lever lock – Often overlooked but very portable and a good supplement to other security devices, it clamps the front brake lever fully on.

Disc lock/U-Lock – Lock your U-lock to an immoveable object or ideally fit through the rear wheel and over swingarm, use as well as a disc lock. Fit a disc lock snugly to the caliper.

Disc/U-Lock – Very transportable if you’re on the move but not a deterant on their own.

Side door – Don’t ignore the side-door to your garage, make sure it’s properly secured, it’s no good securing the garage door if you have a side- door made out of balsa wood!

Block the exit – If you own a car, use it to block the entry to your bike, into a corner, against a wall or to prevent the garage door being opened.

Neighbours – The more people that know you and the fact that you own a bike, the more pairs of eyes you have to report suspicious activity. Join the local neighbourhood watch scheme, twitching curtains may be enough to make a bike thief think twice

Routine – Wherever possible, avoid parking your bike and the same place, if your regular movements are being watch by an organised bike gang they will know exactly when best to steal your bike. The less opportunities they have the better.

Helmet – Don’t lock your helmet to the bike, you will make the theft more desirable and increase the likelehood of theft.

Guard dog – No-one is likely to argue with a rotweiler, not even a bike thief. Give the impression you own one by erecting a sign ‘Beware of Rotweiler’.

Ultraviolet Pen – Cheap and effective way of marking various parts of your bike and only visible under an ultraviolet light.

Padlock – Use a tiny padlock of the chain, they are unlikely to notice it and if they do attempt to ride it away, it will throw them off.

Spare Parts – If you order secondhand spares for your bike, make sure you are dealing with a reputable breaker, an unscrupulous breaker will be aware of their next potential bike for breaking.

Fit an alarm to the light switch in your garage, set to off between midnight and 7am. A small job for an electrician.

CCTV – If you cannot afford a camera to monitor your bike 24-7, fit a false CCTV camera, they are readily available and a good preventative measure.

Police – Ask the advice of your local constabulary (remove your race can before you go down there!). They will have experience of dealing with the scum that want to nick your bike.

Safety – don’t try to carry your locks in a rucksack, many bikes have U-lock compartments under the seat or even behind the number plate, use a disc lock bag, specially for transporting your locks. 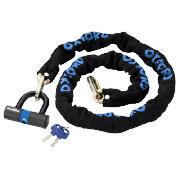 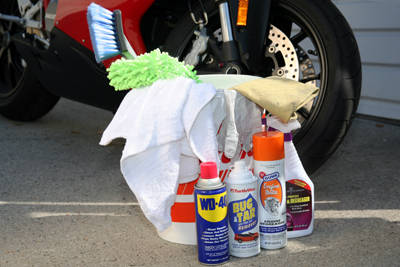 Whether you own a custom cruiser or a sports bike, you’ll want to keep your motorcycle away from commercial washing facilities and perform the cleaning ritual yourself. Those high-pressure hoses can damage bike parts, which are more vulnerable than mechanical parts in cars.

Be sure you find a shady spot to wash (and dry) your bike, since the sun can create temperature differentials that harm paint and allow water to leave spots.

You will need to organise the following: 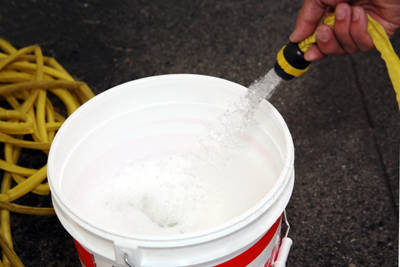 While some people swear by washing their bikes with plain water, others insist on using specific brands of soap. Whatever your style, use warm water with the mix and fill up a bucket for convenience.

Keep the sponge nearby, and don’t let it touch the ground (since it can pick up pebbles or abrasive particles that could damage your paint.) 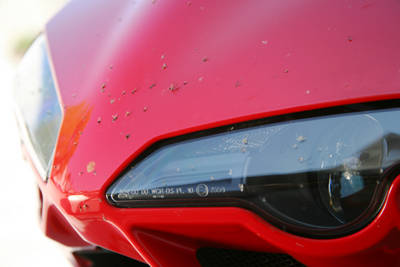 Dead bugs and grime are the bane of every motorcyclist, but using the right tools will get them off your paint easier than you think.

Bug and tar removers work surprisingly well, and some people also use WD40 for this duty. Don’t scrub too hard into the paint when loosening bugs, and be sure not to use the same sponge for other cleaning duties. 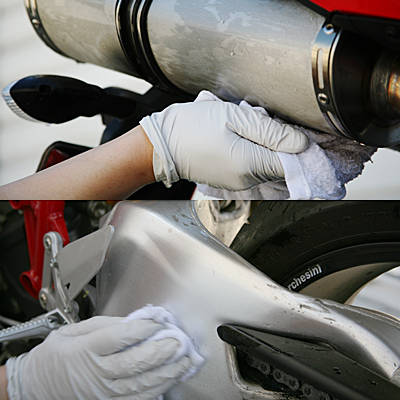 Using a degreaser, scrub hard parts carefully and individually, making sure not to let the powerful solvents touch paint or chrome. No need to use microfiber materials here; a rough rag will do.

Some people use oven cleaner to remove boot marks from chrome exhaust pipes, but extra care must be taken to keep strong cleaners away from the sensitive bits. 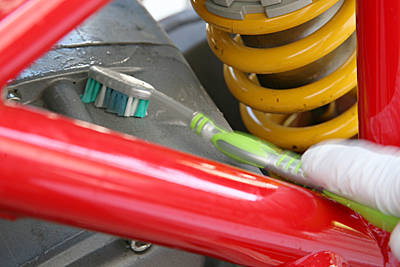 You might not need to get your motorcycle to concours condition, but a toothbrush will go a long way towards making hard to reach parts look clean. Apply degreaser on the tip for non-chrome engine parts, and oil and grime will disappear. 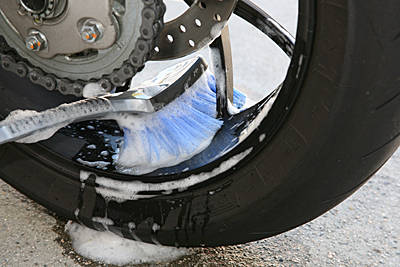 Wheels can be difficult to clean, and a long-armed brush is usually the best way scrub off brake dust and dirt. Apply a wheel cleaner first and let it settle before scrubbing it off. Chrome wheels will require specific cleaners, so be aware of your wheel’s finish before purchasing a cleaner.

Don’t use tire dressing products, as their glossy finishes can compromise grip. 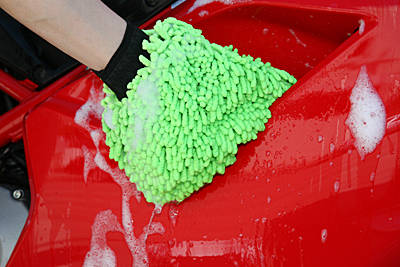 Microfiber sponge gloves are great ways to clean a bike’s painted parts, and should be used with warm, soapy water from the bucket in Step #2. Be sure to get the paint good and wet before scrubbing, so the soapy water can act as a lubricant and not scratch the paint. Only use 100% cotton or microfiber sponges, as other materials can cause damage.

Rinse the soapy residue off with a gentle stream of water from a hose, or by pouring water from the bucket. 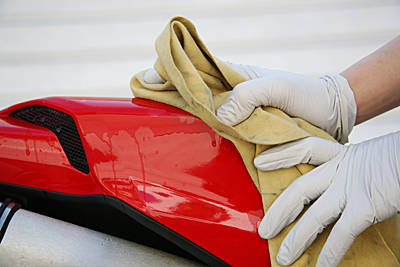 With your bike still parked in the shade, use a chamois cloth to soak up the moisture from the paint. The chamois will keep the finish from getting scratched, and prevent streaks and spots from accumulating.

Feel free to reward yourself with a ride on your newly cleaned bike; not only will you enjoy the breeze after all your hard work, the air movement will dry out many of the parts you might not have been able to reach while you were drying it.